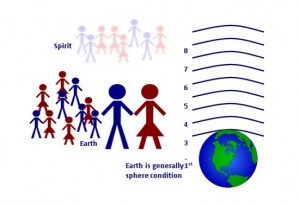 After death, when a spirit — human without the physical body — first enters the spirit world, its condition of mental, moral and spiritual development determines its place of abode.

Most start on the earth plane, in which there are several spheres. Here conditions are not too different from those on earth with the same ideas of right and wrong, beliefs, ideas and desires. Friends and relatives can help and instruct the newly arrived spirit on how to proceed higher. Depending on the spirit’s soul condition as well as priorities, they will move through the various spirit world spheres along the lines of intellectual, moral, or spiritual development. The last of these involves actively seeking the Divine Love and New Birth and is the only way to the Celestial Spheres (God’s Kingdom).

Based on their inclinations and natures, spirits can progress to different higher spheres. Those with desires for moral and mental development are assigned a place in the Second, Fourth, or Sixth Spheres. They pass through the intervening spheres, but do not stay long or gain much. At the Sixth Sphere, one’s mental and moral qualities are developed to their greatest extent, but the soul is not developed as they do not seek the Divine Love and at-onement with God. It is a sphere of great happiness for those who have developed mental and moral excellence. They can progress higher by realizing the need for and praying for the Divine Love. However, many are satisfied in their state of happiness and do not seek it. Some do awake to the necessity of seeking their soul development as a result of childhood recollections of teaching that God loves them. Indeed, as Jesus taught, becoming as little children is a way to God’s Kingdom (Matthew 18:3-4).

Those who make their highest priorities the seeking of the Divine Love and the development of their soul are assigned to the Third, Fifth, or Seventh Sphere. Many of them are more advanced in the mental and moral development than the inhabitants in the Sixth Sphere, for with the soul development through the Divine Love automatically comes mental and moral development. This is because the mind is only an attribute or quality of the soul. Indeed, by seeking God’s Kingdom first, all else is added (Matthew 6:33).

The mind of and by itself cannot always discern absolute Truth, but only relative truth. Therefore even highly developed spirits in the even-numbered spheres may have and pass on misconceptions. However, a spirit whose soul is being developed through the Divine Love will gradually be learning the ultimate and unchangeable Truth about the realities of God. The eyes of the soul bring an interior perception which doesn’t need reasoning from cause and effect to discern the truths of God.

At the Seventh Sphere (highest below the Celestial Spheres), the intellectual and moral qualities are developed to the highest degree and the Divine Love is also present in the soul, but a little short of reaching at-onement with the Father. Here the mind becomes so subordinated to the powers and operations of the soul perceptions that it can no longer exist as mere mind, independent of soul development.

In all the spirit world spheres below the Celestial Spheres, the spirits are growing in their natural love, but still retain their worldly affections which tend to retard their progress. In the first Celestial Sphere, all the natural loves and affections are absorbed by the Divine Love and interest in the affairs of the earth ceases. Faith and prayer for the Divine Love are the only prerequisites for progressing to the higher spheres and eventually to the Celestial Spheres. Each higher sphere brings a greater happiness, even though at every lower sphere, the happiness is such that it is unimaginable that it could increase.

In the Celestial Spheres live those who have been redeemed by the Divine Love and Mercy of God the Father and possess the gift of immortality. Their soul qualities are so developed, that they are a part of the Father’s Divine Nature. They can continue to grow in the Divine Love and perfection till they get into the presence of the Father and are able to see Him with their ever-increasing and clearer soul perceptions.

All along, God respects the free will and desires of His creatures and will not force anyone to seek the Divine Love. Rather, He waits till they learn from their own experience and become dissatisfied with their level of happiness at the moral and mental level. With such dissatisfaction comes the desire for a Source of happiness beyond themselves. God makes his redeemed happy by setting before them an ever higher mark for which they may seek with the assurance, that it can be attained.

Below is a graphical representation of the spheres in the spirit world. The graphic is used by permission of John Doel of Pascas Health Foundation. 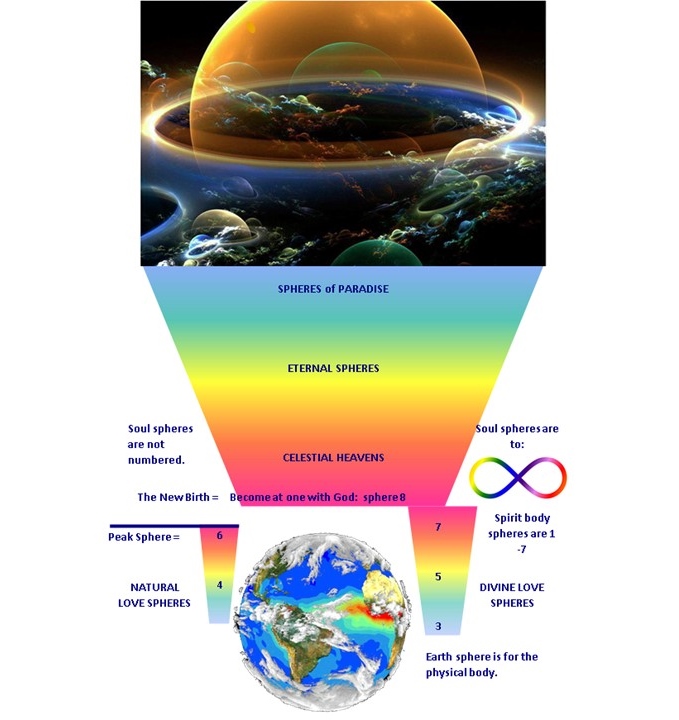 Other graphics created by and used by permission of the late Kathryn Stokes, USA:
Soul progression – PDF
We Create Our Destiny – PDF
Two Pathways – PDF

Related articles on this site: