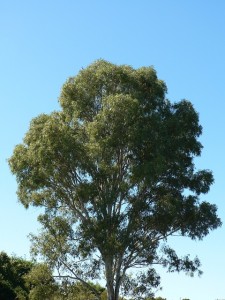 Our first parents, Adam and Eve, also known as Amon and Aman, were created beautiful and their physical bodies had the potential for a longer life than humans have nowadays. They enjoyed each other’s love, as well as a close relationship with God, and had no fears or worries. Their souls were made in God’s image, but this image was given a potentiality of receiving the divine substance of their Creator. This however, was on the condition that they obeyed the laws that God had put into operation.

After a time, our ancestors became enamored with ideas of their own greatness, thinking they were all powerful and all wise — that they were as God was. As a result of this belief, they began to feel that they didn’t need to depend on God any longer or comply with His laws and decrees. Rather they thought that they could by their own will and effort obtain the divine substance by doing what they had been forbidden to do – that if they only exerted their powers, they would become as great as God and able to obtain that immortality which He possessed.

The disobedience was in not waiting for God to bestow upon them the Divine Love that would make them like Him in substance as well as in image. It stemmed from the unlawful desire to obtain the divine soul substance before they were in condition to receive it in accordance with God’s prescribed laws. Exercising their free wills, they followed their desire, rather than remaining in submission to their Creator. This was what constituted the Fall of Man.

As soon as they rebelled, the scales dropped from their eyes, and they saw how naked and impotent they were. As a consequence of going against God’s decree, they lost the potentialities of obtaining the Divine Love, which would have transformed their souls into divine substance and imparted immortality. They continued as beings still possessed of the spiritual and physical forms and souls, but were never again restored to their original state of beauty and happiness. The law had imposed its penalty, and they were powerless to relieve ourselves of it, and had to live thereafter without the possibility of obtaining the Divine Love.

They weren’t evicted out of Paradise as the symbolic Genesis story relates. Rather they continued to live in the same place, but could no longer be satisfied with the spiritual food that had previously supplied their wants and enabled them to subdue their physical appetites. As a result, the physical asserted itself and the spiritual became subjected to it, and they became as mortals now are, and had to earn their living by work in order to make the earth supply food for their physical needs.

References:
Genesis 2 and 3 elaborated on by Angelic Revelations of Divine Truth Vol 1, Chapter 17 and Vol 2, Chapter 10