A New Cat Manifests: The Story of Whitey

The story of Whitey shows how God goes ahead of us and provides for our needs and happiness in ways that we don’t even think we want or can’t imagine.

We met Whitey’s (then Ivy’s) owner, Beck, as we were coming home from a walk around November last year. Living only about five minutes from our home, she was working on her camper van, equipping it for a trip around Australia with her cat, Lily, and dog Charlie. Ivy, her other cat, couldn’t come along because she couldn’t tolerate extended car travel. Beck mentioned that she was looking for a new home for Ivy, and did we know anyone who could take her? At that time, our own ageing cat, Blackie, was still alive and well, and we couldn’t think of anyone offhand.

We continued to see Beck from time to time as she worked to get ready for her trip – originally scheduled for early this year. At one point she mentioned that a friend of hers would take Ivy. Time went on, and Beck was delayed in leaving, and the plans with her friend for Ivy’s re-homing fell through. Occasionally, driving by, we saw Ivy in Beck’s front yard, and liked her, but didn’t have any contact with her.

Meanwhile, on April 26 (the day after ANZAC Day in Australia), with only a few weeks of decline in health, Blackie died. In some ways, it wasn’t a surprise as she was 19-20 years old. Naturally, we missed her, and experienced grief as if we had lost a dear friend. For the first few weeks thereafter, we weren’t ready for another cat.

Three weeks after Blackie’s death, on Tuesday, May 17, we were again walking past Beck’s house on our way home from an early afternoon walk. The sun was shining, and Beck and Ivy were in the front yard. We started talking with Beck and she confirmed that Ivy still needed a home. I called the cat and she came to us and let us pat her. She then rolled on her side and wanted a tummy scratch. She also rubbed her body against our legs. These were all positive signs that she liked us and could make a good pet for us.

The liking was mutual, so we gave ourselves a day or two to think it over. The next day, the three of us mutually decided to have a trial run with Ivy coming to our place.

Three days later, on Friday, Ivy would visit our home for the afternoon. Overall, her first visit went well. After the first five or ten minutes of understandably being frightened and disoriented, after being comforted and reassured, Ivy felt comfortable to explore her potentially new home. We had her come for a similar afternoon visit on Monday, and it too went smoothly. On Tuesday, the plan was for her to stay overnight.

After dinner, the cat went out and didn’t return for an hour or more. We started getting concerned and finally called Beck. The three of us walked up and down our street – but no cat was to be seen. However, as soon as we came back inside the house, we were relieved and delighted to see that Ivy came back by herself and was there waiting for us! After that the night was reasonably uneventful, except that Ivy was gone around 3:30 am and didn’t come back for breakfast. As we learned after calling Beck around 9 am, the cat had found her way back to her home!

We started having doubts that the re-homing would work. Would Ivy just keep running back to her old home? We didn’t make further visiting plans that day – but Ivy surprised us the next night. She came back by herself and was heard meowing in the back yard when one of us visited the restroom around 1:30 am. We let her in and welcomed her with open arms. She ended up sleeping at the foot of our bed till we got up! This was a remarkable turn of events.

We gave Ivy breakfast and took her home before lunch as we were going to be out for several hours. We made plans to pick her up the next afternoon, on Friday, May 27, for another visit.

In the morning, Beck called, saying that she would be out all day visiting a friend, and could she drop Ivy off in the morning? We agreed and the cat stayed with us till around sunset – getting more and more familiar with our home and backyard and more settled.

We gave ourselves most of Saturday off as we were going to be gone in the afternoon, but planned to pick up Ivy after we got back, around 4 pm. The cat was nowhere to be seen at Beck’s place that afternoon – did she wander off to our place? Of course, we’ll never know. She returned at 4 pm, ready for us to pick her up. The night went well and we dropped her off at her home before going shopping on Sunday morning.

From Monday night, we planned to try a two-night stay. However, Ivy gave us another surprise in that she came by herself on Sunday night at around 7 p.m.! So our two-night trial period stay started one day earlier. All went well and she didn’t go back home. When we dropped her off on Tuesday evening, we were wondering if she would come back to us during the night. She didn’t.

The next morning Beck told us that after we left, the cat seemed confused as to where her home was. So Beck just gave her a lot of love and reassurance. It gave her some special time with the cat, saying good-bye, before Ivy would become ours.

In looking back, we can see that Beck’s home, as she was preparing it for renters while she was gone, was becoming in more and more of a disarray and Ivy no doubt sensed it. By contrast, she seemed happy with her new place and all the love that she was receiving from both of us.

We picked up Ivy (now Whitey) from Beck’s home one last time on Thursday afternoon, June 2. During her almost two days with Beck, we both began to miss the cat. We were really looking forward to her coming back to our place. During her visits, Whitey had begun to truly bond with us, and our love and appreciation of her had grown. She is a very affectionate, cute and loving cat.

On Friday, we visited the nearby pet shop (appropriately named Pet Barn) and bought Whitey a tag engraved with her name and our phone number. We also received excellent advice regarding good quality cat food for her.

On Sunday was the day of Pentecost – an annual day on which some Christians remember the coming of the Holy Spirit and the start of the Church, in that the Holy Spirit imparts God’s Love into people’s soul, creating the new heart foretold by the prophets. The Holy Spirit has often been symbolized by a white dove. There seemed to be a similar symbolism of love and purity with the arrival of a white cat. So we have seen Whitey as a Pentecost blessing! 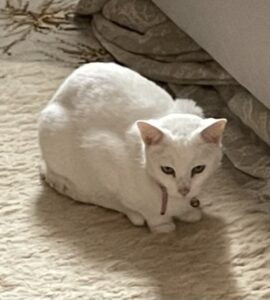 As of this writing, Whitey has been with us for just over a week and brought us a lot of love, laughter, fun and joy. She is sweet and affectionate. Even though Whitey is about five years old, in many ways, she still acts like a big kitten. She is peaceful during the day, but comes to life in the evening and at night. If it is not too cold, she goes wandering outdoors and may stay away for two or more hours, but she always comes back.

Unexpectedly, last Sunday night was one of consternation and drama with Whitey. Just before our bedtime, she brought us a live mouse and let it loose in the living room! The mouse ran around the room and hid from the cat behind the bookshelf. We went to bed, after realizing that we couldn’t do anything – the cat had to catch the mouse again. I was praying that it wouldn’t get stuck somewhere behind furniture, such as the bookshelf, and die there, as it would be very hard to get it out.

I went to the restroom around midnight and peeked into the living room to see what the cat was up to. The mouse charged out toward me with the cat in hot pursuit. She caught it again and took it out. We had to close the cat door for a time as we didn’t want Whitey to bring the mouse back. Hopefully this kind of cat activity won’t happen too often, though of course, it is in the nature of cats and they do it out of love – bringing their owners a present.

Whitey has been a gift of grace at just the right time. She was kept for us for at least six months – from the time we first heard about her needing a home (but still had Blackie), through someone else being willing to take her but cancelling, and through our not wanting a cat for a time after Blackie died.

The trial period worked out very well for all concerned – especially our getting to know and used to Whitey and she getting used to us, and Beck feeling comforted in that her Ivy was in a home where she would receive loving care.

Even though for a short time we doubted that Whitey was the right cat for us (with her being so active as a young cat and therefore interruptive of our quieter routine), any concerns we had have now been left far behind.

Whitey has now settled down and fits into our daily rhythm. The transition was smooth and Whitey is feeling right at home. She greets us first thing in the morning by jumping on our bed after the alarm clock has gone off and we snooze or chat for another twenty minutes or so. She is there during the day and when we come from having been out, often snoozing on her favorite armchair. She entertains us by playing with her toy mouse or just a piece of string. In many ways, she is non-stop adorable.

Beck is missing her but, as mentioned, she is also happy that the cat has a good new home.

Whitey has really grown on us and we are realizing more and more the truth of the statement: “Cats leave paw prints in your heart, forever and always.”

For a story about our previous cat, Blackie, go to In Remembrance of a Special Cat