The Holy Scriptures frequently refer to “death” and “the dead”, but only in some instances does “death” mean an earthly dying – those whose days on earth are over or the separation of the spirit from the body. Often, the word “death” refers to the separation of the human or spirit from God. By contrast, to be united with God and to belong to Him is “life”.  The dead are therefore those who have forsaken God and as a result are severed from God, the “spiritually dead”.

The first time the word “death” appears in the Bible (Genesis 2: 17), it designates a separation from God, for when God forbade the first couple in paradise to eat of a certain fruit, He added the warning:  “For on the day you eat from that tree you shall be doomed to die.” It was not the death of the body that was meant – the disobedient couple didn’t die then and there – but separation from God. By their rebellion, they went over to the side of evil, and thereby severed themselves from God and access to His gift of the Divine Love, which would have led them to becoming at-one with God and immortal.

So, as the Bible also shows in the New Testament, it is the sin of apostasy from God that carries with it spiritual death.  “Do you not know that you are either servants of sin, which leads to death, or servants who obey the call of righteousness?” (Romans 6: 16).  “What fruits had you to show in those days when you served sin?  Only such of which you are now ashamed, for they end in death.  But now that you are free of sin and have become God’s children, you have the fruit of sanctification, and eternal life as a result.  For the wages of sin is death but God’s gift of grace is eternal life.” (Romans 6: 21-23).

Not all sin leads to separation from God, but only “the sin that is fully developed brings forth death” (James 1: 15).  It is not the stumbling and falling of those who believe in God and seek Him, for the stumbling is through human weakness, and the falls are suffered on the way toward God.  But abandoning God, turning our back on Him, and living as though there were no God, that sin brings forth spiritual death.

“The dead” are God’s enemies.  They have placed themselves under the rule of the spirits of evil.  “For like Adam they have broken the covenant: they have faithlessly fallen away from me.”  (Hosea 6: 7).  They have deserted [their God] and serve the “gods” of evil.  That is the meaning of the word “idolatry” that occurs so often in the Scriptures.  “All of their doings will not allow them to return to their God; for the spirit of idolatry lives within them.”  (Hosea 5: 4).  Because of their disloyal beliefs, they are not ready for a return to God.  “Why should I free them from the power of the kingdom of the dead?  Why should I redeem them from death?  No.  Rather:  O death, where are thy scourges?  Hell, where is thy plague?”  (Hosea 13: 14).  Plagues and scourges are the consequences that apostates suffer through the spirit powers of evil.  They have to be worn down first by suffering and wretchedness; they must become miserable like the prodigal son, until homesickness for their Father’s house – for God – grips them and drives them to return.

Communication with “the Dead” Leads to Idolatry 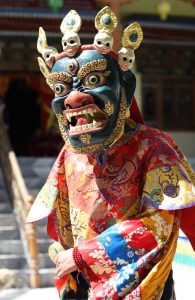 “The dead” or evil spirits, through their human mediums, seduced the misguided people to all conceivable abominations.  Not only did the people eat the flesh of the offerings that had been dedicated to evil spirits in token of their fellowship with the latter. They even sacrificed their sons and daughters and committed the most shameful sexual acts at the sacrificial rites.  All of these practices were instigated by the evil spirits once the people had entered into communication with them.  “They joined up with Baal-Peor and ate the sacrificial offerings to the dead…. Yea, they sacrificed their sons and daughters to the evil spirits.” (Psalm 106: 28, 37).

The effects of idolatry are described as follows in the Book of Wisdom:  “For while they now slay their children in sacrifice or celebrate secret rites, now hold revelries with strange rites, they keep neither their lives nor their marriages undefiled.  No, one commits treacherous murder against the other, or hurts him by adultery.  Among all without exception there prevailed bloodshed and manslaughter, theft and fraud, corruption, unfaithfulness, tumults and perjury, disquieting of good people and ingratitude, defiling of souls and unnatural sexual practices, the break-up of marriages, adultery and fornication. For worshipping dead idols is the beginning, the cause, and the outcome of all calamity.  For either they rave in their merriment, or they prophesy lies.”  (Wisdom 14: 23-28).

The power of evil is so great, and its ways of beguiling others so subtle, that those who have once fallen into its snares find it almost impossible to extricate themselves. Of all the weapons of the Powers of Darkness, the mightiest is a mixture of truth and falsehood.

The parents of children who were to be sacrificed were told that after their child’s death, its spirit would constantly be around them and bring them good fortune, but that both they and their child would experience the most dreadful things if they refused the idols this sacrifice.  Attached as they were to their offspring, they always gave way in the end.

During the rites performed before the idols and at idolatrous gatherings generally, the evil spirits announced their doctrines through their trance mediums and supported them by the exhibition of miracles.  Not infrequently, the idols themselves spoke.  Such speech was a “direct voice” produced by the low spirit world. God permitted all this because he allows complete freedom within the limits that have been set for those who are evil.

The cause of apostasy from God was then, as it is now, the craving for worldly success and prosperity.  In those days the prerequisites for communicating with the spirit world were well known, while today they have fallen into oblivion.  Consequently, apostasy manifested itself in those times not only in inner defection from God, but in deliberately fostered, humanly perceptible communication with the evil spirit world through spiritualistic idol worship.  “Inquiring of the dead” was a daily need of the worldly minded, as inquiring of God was an integral part of the worship of the faithful.

The messages sent by the “dead” through their mediums were such as to flatter the human passions of the recipients.  Everything they heard was pleasant, and so they had no desire to listen to God’s instruments, the good mediums. What the latter had to communicate to them at God’s behest was too bitter for them. “For it is a rebellious people, with children who turned out badly, who will not hear the commandments of the Lord.  They say to the seers, ‘Do not see’, and to God’s prophets, ‘Do not prophesy the truth for us.  Prophesy pleasant things, prophesy deceits, leave the right way, depart from the righteous path.  Don’t bother us with ‘the Holy One of Israel’!”  (Isaiah 30: 9-11)

However, the worship of Baal consists only of people’s making real idols and deliberately seeking association with the evil spirit world, as was the case in ancient times and still occurs in the idolatry of some peoples today.  Rather, idolatry is any state of mind that excludes God from our lives, that turns wholly to material matters, and that, under the influence of evil, replaces God with worldly considerations. Mankind of today is no less idolatrous than the people of whom the Bible speaks, even though in so-called cultured areas, idols of wood or stone are no longer erected.

Today’s idols are in people’s hearts. They are money, honor and worldly prosperity.  As many sacrifices are made to these idols today as to the visible idols millennia ago.  It is to these modern idols that millions of adults and millions of children are sacrificed each year, though in a less crude manner.  The evil spirit forces of the “kingdom of the dead” rule over a large part of mankind today, and what the prophet Micah said of the generations of his time is equally true at present:  “The faithful are gone from this land; among men the honest are no more.  Everyone is on the lookout for evil deeds; each one ensnares the other. Against her who lies on your bosom guard the portals of your mouth.  For the son disdains the father, the daughter defies the mother, the daughter-in-law defies the mother-in-law.  A person’s enemies are those of his household.” (Micah 7: 2-7).

But God will be merciful even to humankind of today.  He will see to it that they enter into communication with the good spirit world, learn the truth of His Love and the ultimate human potential, and thereby be raised from the dead.  “It shall come to pass that I will pour out my spirit world upon all flesh; and your sons and your daughters shall prophesy, your old people shall receive revelations in [dreams], your young people shall see visions; even upon the servants and upon the handmaids will I pour out my spirit world in those days.”  (Joel 3: 1-2 in the Catholic Bible; Joel 2: 28-29 in the Protestant Bible)

Reference, and parts adapted from: Johannes Greber, Communication with the Spirit World (translated from German original, copyright 1932, with subsequent translations and revisions, pp. 149-160.)

For background information, go to Forms of Mediumship.