Many have heard the stirring Christian hymn entitled Amazing Grace. (To hear a musical rendition, click here.) This page presents the words of this song, as well as a brief biography of its composer — John Newton, a slave driver, who during a storm at sea came to a dramatic awakening and from there on devoted his life to serving God and fighting for the abolishment of slavery.

Amazing grace! How sweet the sound
That saved a soul like me.
I once was lost, but now am found,
Was blind, but now I see.

’Twas grace that taught my heart to see,
And grace my fears relieved.
How precious did that grace appear
The hour I first believed.

Through many dangers, toils and snares
I have already come;
’Tis grace hath brought me safe thus far
And grace will lead me home.

The Lord has promised good to me
His word my hope secures;
He will my shield and portion be,
As long as life endures.

Yea, when this flesh and heart shall fail,
and mortal life shall cease,
I shall possess within the veil,
A life of joy and peace.

The earth shall soon dissolve like snow,
The sun forbear to shine;
But God, who call’d me here below,
Will be forever mine.

Some versions include an additional verse, which however was not written by John Newton:

When we’ve been there ten thousand years,
Bright shining as the sun,
We’ve no less days to sing God’s praise
Than when we’d first begun. 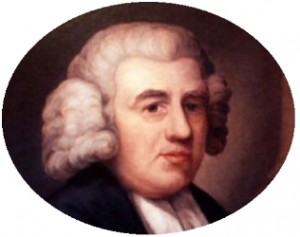 Born in London in 1725 as the son of a commander of a merchant ship which sailed the Mediterranean, John also became a seafarer. Ultimately he became the captain of his own slave-trading ship.

Although his mother, who had died early in his life, taught him about God, in his adult life, he abandoned all that he learned. However, on one homeward voyage, while trying to steer the ship through a violent storm, he experienced what he would later call “great deliverance.” When all seemed lost and the ship was about to sink, John exclaimed, “Lord, have mercy upon us.” As he subsequently reflected on what he had said, he began to believe that God had addressed him through the storm. For the rest of his life he observed the anniversary of May 10, 1748 as the day of his conversion, a day of humiliation in which he subjected his will to a Higher Power.

In 1750 he married Mary Catlett, with whom he had been in love for many years. By 1755, after a serious illness, he had given up seafaring forever. During his days as a sailor he had begun to educate himself, teaching himself Latin, among other subjects. Later he met George Whitefield, a deacon in the Church of England, evangelistic preacher, and leader of the Calvinistic Methodist Church, and became his disciple. He also met and came to admire John Wesley, the founder of Methodism. He continued studying and learned Greek and Hebrew.

Newton decided to become a minister and eventually was ordained by the Bishop of Lincoln and accepted the curacy of Olney, Buckinghamshire. Many flocked to his church. He also travelled to preach in other parts of the country. In 1767, the poet William Cowper settled at Olney and became Newton’s friend.

Cowper helped Newton with his religious services and on his tours. Besides regular weekly church services, they began weekly prayer meetings with the goal of writing a new hymn for each one. They collaborated on several editions of Olney Hymns, which enjoyed great popularity. The first edition, published in 1779, contained 68 works by Cowper and 280 by Newton – including “Amazing Grace”, then by a different title.

In 1780 Newton became the rector of St. Mary, Woolnoth, in London. There he again influenced many, including William Wilberforce, who later became a leader in the campaign for the abolition of slavery. Newton preached until the last year of his life, by which time he was blind. He died in 1807, secure in his faith that amazing grace would lead him home.

The epitaph on his gravestone, engraved on a marble plaque in St Mary, Woolnoth, and written by himself, says:

JOHN NEWTON, Clerk [preacher]
Once an infidel and libertine
A servant of slaves in Africa,
Was, by the rich mercy
of our Lord and Saviour JESUS CHRIST,
restored, pardoned and appointed to preach
the Gospel which he had long laboured to destroy.
He ministered
Near sixteen years in Olney, in Bucks,
And twenty eight years in this Church.

Another similar, but different, perspective on divine grace is found here.